15 boats entered the 2019/20 Hong Kong Class Championships held over the weekend of 7 – 8 December. It was be the first time in many years that the fleet championships would be raced on Victoria harbour, with the city as a back drop. With a Northerley wind forecast for the weekend it was to be a shifty and unpredictable breeze as the pressure came over the mountains and into the Harbour.

The first day of the championships saw three boats being called over the line and all 3 going back, Sam Chan and Nick Atkinson on FF4038, Kelvin Cheung and Michael Bennett on ff3978 and Peter Britten and Oli Merz on FF3722. All three decided to split from the fleet to the right side of the course which proved a winning move, as they arrived first at the windward mark, places they wouldn’t relinquish in what would become a regatta of getting the shifts right throughout the weekend.  There were wind holes the size of ships and had real ships slicing down the middle of the course to add to the tension.

After day one Peter Britten and Oli Merz held top spot, but with a number of boats in close proximity, it was all on for day two on Sunday. The first 2 races on day two were sailed up and down Kai Tak but the wind shut down in the final stages of the second race causing the whole fleet to drift across the line for a finish.

It all came down to the last race, which looked like it was going to be cancelled until the breeze filled in to give a steady (ish) 7 knots of breeze to decide the championship.

Kelvin Cheung and Michael Bennet on ff3981 took a huge lead on the first beat and rounded the top mark with a clear lead, followed by Sam Chan and Nick Atkinson on ff4038 and then Chris Howard and Niall Westley on ff3468. These boats were then followed by the chasing pack of John Tse and Andy Yeu ff3978 then Peter Britten and Oli Merz on ff3722 which would create the front group of five for the race.

As the wind swung it was a matter of picking the shifts both up and downwind, with John and Andy ff3978 picking their way through the fleet it looked like their race until they selected the wrong windward mark allowing ff3468 and then ff3722 to squeeze through.  These two boats then had a fight to the finish with Peter and Oli ff3722 taking Chris and Niall ff3997 out on starboard and gybing for the line to clinch the finish by just a couple of boats lengths, taking the race and the championship.

After a difficult 2 days racing it came down to the top 5 boats fighting it out in strong tide and patchy wind.  Peter Britten and Oli Merz lifted the trophy in ff3722, with John Tse and Andy Yeu ff3978 taking second to finish the podium it was Kelvin Cheung and Michael Bennet ff3981 taking third place.

A big thank you to the race organisation team who had a tough job in difficult condition to get all 6 races and Oli Merz for working with the club and RO teams to ensure we could get a Championships done in the harbour. 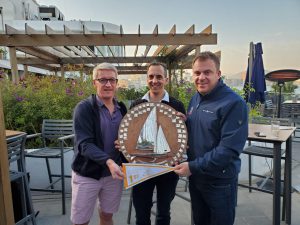 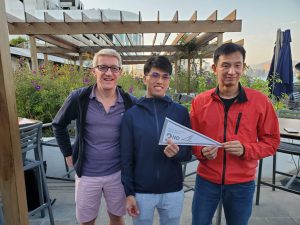 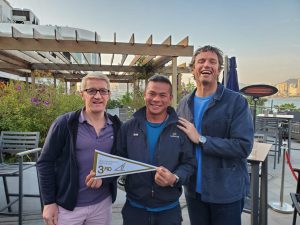